I have tried to like ‘em, but the new Facebook “timeline” profiles make me uncomfortable. It’s not just their aesthetics - the magazine-like layout, the lack of focus, or the strong whiff of narcissism - it’s the way they encourage me to treat the “past” as something that actually exists. It does’t.

The past does not exist; it’s a product of your memory.

Instead, stare straight down your nose at the present; it’s where life happens. Imagine the clean slate you’d have if you forgot your past; you might wake up speaking with a thick Irish accent or stop laughing at your bosses jokes.

To me, the timeline feels like an idea conceived by a 27-year-old. Here’s my summary of Facebook CEO Mark Zuckerberg’s timeline:

Whew! If that were my timeline I’d want to share it with you too. Ni hau li hai, Zuckerberg xian sheng!

I will be at least 43 years old by the time you read this; most of my life happened before Facebook. Here’s my timeline, analog format. 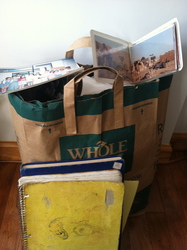 That’s “me” from age 18 to 28: photos, handwritten journals, concert tickets, and artifacts from places I’ve visited and things I’ve done that I wouldn’t dare do again. While my adult life has been fun, suprising, and adventuresome, I can’t see the value in spending too much time mulling over the contents of that paper shopping bag. More than once I’ve considered throwing the whole lot out; I doubt I’d ever miss it.